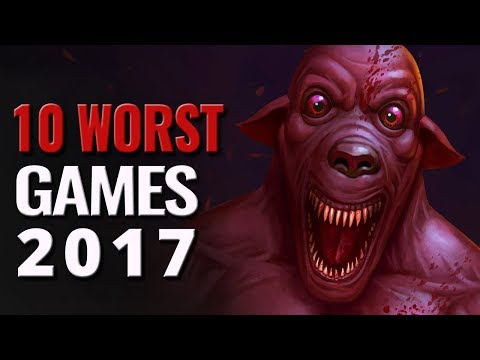 Whatoplay presents the worst games of 2017 on all consoles. Let’s check them out right now! 10. First on the list is Hello Neighbor A stealth horror game that aims to showcase the advancement of video game AI. Play as a character determined to find what’s hidden inside their neighbors basement. The story is a little interesting, especially when it’s blended with light horror tropes. It was clear that it’s first 2 Alphas were enjoyable, but the moment the game got released, it threw it all away. It was riddled with bugs and it was unoptimized for a released game. Players who supported the game before the release were greatly disappointed with the lack of surprising features. It’s puzzles also left some players satisfied, with no feeling of reward. The game is so illogical it lost all its scares and charm. With its advanced AI, it feels like the game took a step backward instead of making a leap towards the future.

Goodbye, Neighbor. It has a PlayScore of 9. DYING: Reborn PSVR The PSVR was said to be Sony’s next big thing. Unfortunately, for VR in general, it didn’t quite make the impression to most players. Out of the 100 various VR games and over 900 thousand units sold, there’s no guarantee every game they release is critically acclaimed. DYING: Reborn PSVR was one of their releases. It’s a different game compared to the other DYING: Reborn without the VR tagline. This horror game takes out few of the best moments from the original game and carefully selected one episode for full VR experience.

This stupid decision caused the game to flunk with bad scores due to unnecessary cuts, ultimately making it half the game experience. It had some good moments due to its realistic visuals and enjoyable puzzles. However, it was still marred by its unsatisfying presentation and a dulled down storyline. This game deserves to stay dead. It has a PlayScore of 8. 1-2 Switch Ahh, one of the best things about the Nintendo Switch was its collection of promising games. Surprisingly, this game release during Switch’s launch was very disappointing. We get that it’s a demonstration for Nintendo’s new hardware features, but it completely fails due to its shallow and gimmicky elements. Meant to be played with a friend or two, 1-2 Switch excels at showing the power of the Joy-Controllers. It’s sensitive and really delivers the right feedback to your device. Go toe to toe with players in a Cowboy Gunfight, or try to engage in a magical wizard battle with a friend.

The sad thing is, the enjoyment only lasts for about 30 to 50 minutes and you can easily feel the game’s emptiness by then. It’s quirky, bizarre, cringey and sometimes it goes right, but it’s not worth the full price. It has a PlayScore of 7. RAID: World War II A game filling in with the oversaturated co-op shooter market. Set during the time where the Nazi’s are winning the war with etheir massive war machines. Choose between four POW’s with different personalities and skillsets. Team up with a friend or do it alone as you rain down hell on Nazi scum. It’s a budget Wolfenstein, but without the absurd blood, monsters and gore. But despite its warmongering charm, it doesn’t live up to everyone’s expectations. Sure, it’s fun when played with friends, but there are better games to spend most of your time with.

Like PUBG, or Payday. It was obviously rushed due to brain dead AI, bad optimization, and outdated mechanics. In short, it feels like a PlayStation 2 game. It has a PlayScore of 6. Inner Chains Another horror game on the list that fails to deliver the right amount of scares and substance. Developed by Telepaths Tree, explore a biomechanical world where humankind is just a small part of a dangerous universe. Your goal is to find the rumored sanctuary is leave this decrepit place once and for all.

But with its immersive world, it is hampered with a monotonous feeling of walking and walking and moooore walking. Everything is static if you ignore the atmosphere and story. Players who supported the game during its Kickstarter days were disappointed. Other notable issues include bugs, texture issues, and SLOW WALKING. It was a total failure and to this day, there has been no words from the developers. It has a PlayScore of 5. NBA 2K18 Who would’ve thought that 2K’s latest NBA title would drop the ball so hard? It’s the war against microtransactions and this basketball game was one of the first to get caught in its crossfire. DICE’s Battlefront II was a low blow for consumers and the gaming industry, and looks like 2K decided to make things worse for themselves. This makes Battlefront II less evil compared to the sinister cash-grabbing elements hidden in this game. For a basketball game, it’s good. It had improved visuals and ball physics. But it’s 2017, players need to create their own journey and that’s where MyPlayer kicks in. Apparently, this simulated version of you is packed with microtransactions you feel unsatisfied if you can’t pay a single penny.

Everything good about its customization lies in its sneaky business model. And that is very, very bad. If you dislike microtransactions, don’t buy this game. It has a PlayScore of 4. Syberia 3 It was one of the most promising games of this year. Benoit Sokal’s latest adventure doesn’t involve microtransactions, instead it’s just plain old terrible, by terrible we mean boring. Step into the disappointing pilgrimage of Kate as she finds herself into a mysterious island. It is very hard to play. Steam reviews about the game is filled with Red Thumbs Down’s due to the game’s clunky movement, empty story, and filled with audio/visual bugs. It’s a complete mess, to put it simply. Fans that were itching to play this sequel were left with a bad finished product. If you’re trying to play the today, don’t. It’s in a bad state.

But despite its shortcomings, it really is a beautiful game. The detailed world and graphics absorbs you into Benoit Sokal’s creation. But… unfortunately, that’s all there is. Beneath it all, it’s a game that needs to be fixed to fully enjoy. It has a PlayScore of 3. Micro Machines: World Series The classic miniscule racing phenomenon returns! But since this is Whatoplay’s Worst Games of 2017, it is an utter shitshow. To start, it’s filled with game breaking bugs and features microtransactions. The bane of all gamers. For a racing game, it’s terrible. It has no correct handling and the cars are too small, especially for a miniature game. Fans felt offended since the original Micro Machines did so well during the PlayStation One and Two days, but this one is nothing like that. The game is so bad there are no players present during online matches. To add insult to injury, the game has no proper single player mode and it only has 12 cars to choose from. Childhood ruined. It has a PlayScore of 2. Urban Empire Rule the city in this different kind of strategy game that combines city-building and politics.

Picture Cities Skylines, but with a growing social and historical events. Choose from 4 ruling families and create your own empire by controlling various needs of the people. But once again, this is a worst list. The game had its pensive moments due to its deep world building, but it fails because of its DEEP WORLD BUILDING. It’s their own concept that brought them their own demise.

It was a neat premise, but it’s badly executed. Everything is predetermined and your actions don’t make much of a difference. Sure, the game is a city-builder, but it can only be enjoyed during the game’s first few hours. After that, you’re left with a slow and boooring simulation that has no payoff in the end. It has a PlayScore of Here are the Runners-Up before we reveal the number one: 11. Impact Winter. A crowdfunded game that didn’t reach everyone’s expectations. It’s repetitive, unrewarding and devs don’t even care about the players. It has a PlayScore of 12. Double Dragon IV. From Arc System Works, this beat ‘em up offers nothing new to the Double Dragon table while also murdering the players’ nostalgia with their cash-grabbing attempts. It has a PlayScore of 13. Birthdays The Beginning. A voxel-based game where you play as a god and creating more life. Create your own ecosystem and watch it burn due to the game’s tediouscontrols, bad menus and broken save button. It has a PlayScore of 14. Mysterium: The Board Game. An iOS game is a fun game, no doubt. But the game’s difficulty left players frustrated.

It has a PlayScore of 15. ELEX. Once a part of our most anticipated games, this open world RPG suffers from being a poor Fallout 4 knockoff with the worst combat in existence. It’s an unpolished game. It has a PlayScore of 1. And the worst game of 2017 is… uhh.. Bloody Boobs You heard that right. Look it up on Steam and you’ll get what we’re trying to say. Even the game’s description is so ridiculous it tempts you to buy the game.

For only 2 or 3 dollars, you can experience a game so unnecessary, so stupid, and so bad. It tries to make up for oversexualizing females from realistic boob and butt physics. It is really, really, broken. The game is very unoptimized and it crashes so hard you don’t even care about the ladies anymore. Steam Reviews stated that don’t let your hormones guide for purchasing this game. For the love of god, please don’t pick this game up, not for fun or for pleasure. Might as well press Ctrl + Shift + N if you’re in for that kind of stuff. It has a PlayScore of .