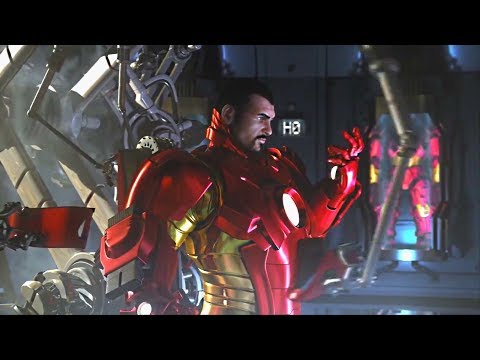 “We just need to reassemble.” What’s going on guys? Hitting you up with news on a game I haven’t talked about in what it seems like forever. And it’s in regards to the Avenger’s Project that was announced back at last year’s E3. This was huge news because in the wake of that announcement Marvel Entertainment also revealed that they would doing a multi-year, multi-game partnership with Square Enix. And admittedly although I was hyped about this I was also bummed. Because Square generally has a bad reputation of announcing things that they take forever to deliver on. Like where the hell is my Final Fantasy 7 Remake release date? Now granted the Avengers Project is being worked on by Square’s subsidiary teams Crystal Dynamics & Eidos Montreal. But this still brought on worries along with frustration. After the announcement we hadn’t gotten anything else but a few rumors from unofficial sources like 4Chan. With some articles stating that it would be the soul successor to Raven Soft’s Marvel: Ultimate Alliance.

A classic game series that took some of the RPG elements from it’s predecessors like the X-Men Legends titles and amplified it with a robust roster of iconic characters. There was a butt load of information swarming in on this game. So we were banking on getting something at this years E3. But we got nothing. No photos, no CG cutscene promotion, no anything. So fans were rightfully furious because Marvel Entertainment clearly stated that we’d have more detail in 2018. Fast forward to October of this year and there’s no news. Fans went from venting their frustration, to actually throwing out jokes like how maybe Thanos made it disappear after snapping his fingers.

And that by the time we get the game our grand kids will be playing it. Hell it’s been 3 months since I’ve uploaded any news on it and the views for the last one weren’t that good compared to the 1’s I uploaded prior. And I thinks it’s due in part to fans losing interest along with hope. Now after we didn’t get anything at this year’s E3 I chalked it up to being an executive decision by Marvel Entertainment themselves. Because they already had a hot title in the form of Spider-Man PS4 getting a lot of promotion. A game that’s been getting pushed pretty hard by Sony through various game conferences. It’s been shown off at 3 consecutive E3’s back to back since 2016 with 2 of them closing out Sony’s Conference. Plus Square Enix already had their plate full with other expectations like Kingdom Hearts 3 and a highly anticipated trailer for Final Fantasy 7 remake which they didn’t deliver. So it’s understandable that they might not want it to overshadow their current projects.

I also think given it’s more recent announcement, it’s probably in it’s earliest alpha stage of development. It’s important to keep in mind that Spider-Man PS4 was revealed 2 years before it officially release. So it more than likely had been in development for 3 or 4 years prior to that. So if this project is as big as Marvel Entertainment is making it out to be I’d say they’ve been developing it for 2 years at the very least. So even though I’m pissed that we’ve gotten no more info in over a year I’m somewhat at ease because this indicates that the team is taking their time working on it. If that’s the case then this title has the potential to be just as good as Spider-Man PS4 if not better. Because for the longest time all of the Spidey games have been at the mercy of short deadlines.

The same can be said about some of the previous Avengers games like Ultimate Alliance 2. A title that was somewhat good but was completely devoid of the elements that made earlier entries like Ultimate Alliance 1 and the Legends series great. That’s always been the Achilles heel for the Marvel games, constantly being pushed out with no time or attention by companies like Activision. Hopefully the team of Crystal Dynamics and Eidos Montreal have enough time to give us a solid game. It wasn’t that long ago that Crystal Dynamics handed over Shadow of the Tomb Raider’s development to Eidos Montreal while they tend to another unknown title. So I’m just assuming that it is the Avengers Project. Now 1 of the main things fans have been wondering about is if the project will somehow tie into Marvel’s Spider-Man. Given the fact that Marvel has been going in a completely different direction with how they wanna work with the best game companies. I expect them to be trying something similar to their cinematic counterpart, the MCU. Actually sowing the seed of something small that will overtime grow into something very expansive.

Now for months on end different gaming journalist have been asking Insomniac if their game could be the starting point for an actual Marvel Gaming Universe. But they’d either answer no. Or they’d avoid the question altogether. And this went on for quite a while. It wasn’t until a week after Marvel Spider-Man’s release that the lead developer Brian Intihar started whistling a different tune. During an interview given by Kinda Funny Games Brian mentioned how their was a lot of pressure on them to get the game right. Fair enough anyone can imagine how tough it was to make something that’s usually 3rd party into a 1st party triple A title. But it was what he said in the midst of that expression that raised eyebrows. Take a look. “Marvel says gotta do this.” “And then like a couple years later they’re calling us to do it.” And I’m like oh my god. So yeah it’s been awesome And we knew we had to… “Funny thing that Marvel and I talked a lot about is that this is the Iron Man.” “This is the 1 that’s gonna start it off.” We talked about it from day 1 is like this is the Iron Man.

We can’t F this thing up. “Because it’s a big thing for us.” It’s a big thing for them, it’s a big thing for Sony. “Every single day we would think its gotta be the Iron Man.” So as you can see Marvel Entertainment’s plan wasn’t only to produce triple a titles like we thought. It just so happens to be way bigger than that. They’re actually going for a more expansive universe. And this is something I think fans have been dying to see for the longest with superhero games. A universe that’s constantly expanding with each entry.

Now granted it’s gonna be kinda tricky since there are certain things developers have to work out before going in. Like specifications on what they can and cannot add in the games. And making decision that don’t contradict what’s been established in other spin-offs. This is something they’re most likely gonna have to take into account. But it’s all a learning curve that I think they’ll get use to as they go on.

It’s just crazy to think that they’re doing something that the MCU originally wanted to start out doing. Having they’re flagship player, Spider-Man spearhead an expanded universe. Granted Marvel Studios was able to take what they had and ultimately become the cinematic powerhouse they are today. But it took a great deal of time to get to where they are today. If all of this is true I’m really hoping this expanded universe does what the MCU managed to do in the long run. Which is actually bring lesser known and unpopular characters more mainstream appeal. That’s arguably been the x-factor for the movies because we’re living in a world where C-Lister characters like the Black Panther are grossing over a billion dollars. While mainstream players like the Spider-Man films have yet to cross that threshold. And since things aren’t as complicated as the Marvel tv series and movies we don’t have worry about not seeing our favorite heroes share moments together. There’s literally no exclusivity or copyrights to any of the character like they were years back. This could be huge. Hopefully we get some official news before this year ends.

Like I don’t care if it’s another CG trailer, just give us something to remind us that this game exists. But anyways that’s all the news I have for you guys today. I wanna know what you think. How do you feel about a potential Marvel Gaming Universe? And do you think it can be as successful as the MCU? Lemme know in the comments below. As always I ask that you like or dislike the video.

It doesn’t have to be a thumbs up, it can be thumbs down. Any feedback is good feedback and will only help me improve on future content. But if you really enjoyed the video it would help me out tremendously if you shared it on social media outlets with all your friends and followers. But anyways this was your boy signing out on another video. I’ll catch you guys later. Peace out.